A laser level is a control tool consisting of a laser beam projector that can be affixed to a tripod, which is leveled according to the accuracy of the device and which projects a fixed red or green beam along the horizontal and/or vertical axis.

A rotary laser level is a more advanced laser level in that it spins the beam of light fast enough to give the effect of a complete 360 degree horizontal or vertical plane, thus illuminating not just a fixed line, but a horizontal plane.

The laser beam projector employs a rotating head with a mirror for sweeping the laser beam about a vertical axis. If the mirror is not self-leveling, it is provided with visually readable level vials and manually adjustable screws for orienting the projector.

A staff carried by the operator is equipped with a movable sensor, which can detect the laser beam and gives a signal when the sensor is in line with the beam (usually an audible beep).

The position of the sensor on the graduated staff, also known as a Grade Rod, or Story Pole, allows comparison of elevations between different points on the terrain.

Most laser levels are used in the construction industry 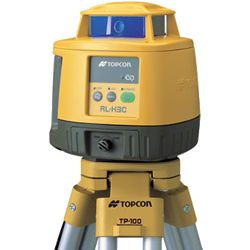